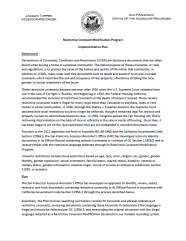 Pursuant to the 2021 legislation set forth in Assembly Bill AB-1466 and the California Government Code Section 12956.3, the San Francisco Assessor-Recorder’s Office (ASR) has developed a plan to identity documents in its Official Record containing unlawful covenants in violation of GC Section 12955(l) and to rerecord them with the restrictive language redacted through its Restrictive Covenant Modification Program.