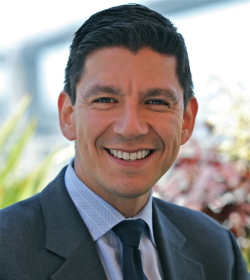 Joaquín Torres was elected as San Francisco’s Assessor-Recorder on February 15, 2022. Prior to his election, Torres served as the Director of the San Francisco Office of Economic and Workforce Development since 2018, and has led citywide efforts to mitigate economic hardships on businesses and workers during the COVID-19 pandemic.

Over the years, Torres collaboratively leveraged resources across City departments to create opportunities for all, expand support for small businesses and workers, build capacity and stability for locally rooted nonprofits, and maximize equitable economic and social impact for the benefit of San Franciscan communities, residents, businesses, and neighborhoods.  As Director of the Office of Economic and Workforce Development, he provided citywide leadership and coordination for workforce development, business development, neighborhood economic development, film, small business, and development planning.

Torres is also the President of the San Francisco Housing Authority Commission, chairing the oversight body as the Authority and City implemented a re-envisioning process to rehabilitate over 3,400 units of public housing with $750 million in improvements, leading to the transfer of ownership to affordable housing providers to best serve low-income communities.

Torres is committed to Social Justice and Equity. He participated in the inaugural cohort of the City’s Government Alliance for Racial Equity program, which equips leaders with the framework and tools to transform systems and institutions impacting historically marginalized groups. Currently, Torres serves as Chair of the Equity, Diversity and Inclusion Committee for the American Conservatory Theatre (A.C.T.) and as a member of the Equity Advisory Council for the San Francisco Bay Area Planning and Urban Research Association (SPUR). Torres is a graduate of Stanford University and New York University's Tisch School of the Arts. He lives in the Inner Sunset with his wife, Ruibo Qian.